Prof. Dr. Lowitzsch
Intercentar
INTERCENTAR is a platform for the Kelso Professorship at the European University Viadrina Frankfurt (Oder) (Germany) and its strategic partners, the Kelso Institute for the Study of Economic Systems, San Francisco CA (USA), Free University of Berlin (Germany), University of Split (Croatia) and Pantheon-Sorbonne University (France), aiming academic cooperation and research, as well as policy advising and consulting.

The concept of the Consumer Stock Ownership Plan (CSOP) enable consumers through leveraged investments in companies that offer their services on regulated markets with natural monopolies (usually enterprises providing public services), to become (co-)owners and (co-)producers.

For CSOP financing, a fiduciary fund has to be established in the first place. Normally, consumers are bound to the company either through long-term contractual obligations (e.g., electricity, gas, water, telecommunications) or de facto monopoly (e.g., transport). Managed by an independent trustee, using public guarantees, the CSOP fund is permitted to take a loan, in order to acquire shares in an existing company (such as a utility operating a power plant) or to invest in a new facility (such as a biogas reactor, a wind turbine or a solar panel). The shares in the acquired productive property are allocated to the consumers proportionally to their consumption, e.g., in case of a CSOP in the energy sector according to their electricity bills. The profits from the company go first to the CSOP fund to repay the loan. Once the credit is repaid, the shares are distributed to the consumers.

The company benefits from the CSOP receiving a stable anchor-shareholder and additional financial resources for further development and investments at small transaction costs. Moreover, due to a positive correlation between financial participation and participation in decision-making, the involvement of the consumers has a potentially favourable effect on corporate governance and sustainable corporate strategy. Becoming (co-)owners of the company, the consumers – depending on the size of their share – obtain voting rights as shareholders. Since the consumers are now in the position to influence the corporate policy, one can expect improvements (e.g., in the service quality).

The Consumer Stock Ownership Plan (CSOP) was designed in the 1950s by the American lawyer and investment banker Louis O. Kelso to enable people without sufficient financial means to acquire productive capital and to stimulate economic growth, based on the prototype of a leveraged buyout. We further developed this idea, adapted it to the current conditions in Germany and developed a model for two concrete applications (problem areas).

Changing energy systems from fossil fuels to renewable energy sources (RES) requires financial, technical and social innovation. A new energy infrastructure must be built and individuals motivated to adopt flexible consumption habits to match demand with the supply of volatile energy. Consumer co-ownership in RES has played an important part in success achieved so far, while guaranteed feed-in tariffs have facilitated the repayment of RES installation loans. A shift to auction systems favouring large-scale projects now threatens this incentive which up to now encouraged citizens to invest. But an ownership stake in RES motivates adapting to new technologies like smart grids. The project addresses the challenge of retaining the benefits of individual consumer participation when moving to economies of scale: How can these new technologies be brought on stream while motivating individuals to adapt consumption to a volatile energy supply? It harnesses best practice models from across the EU such as energy co-operatives and limited partnerships and adapts them to these purposes, utilising the Consumer Stock Ownership Plan (CSOP) to include commercial investors and municipalities. A HORIZON 2020 proposal for this multinational project application is pending. 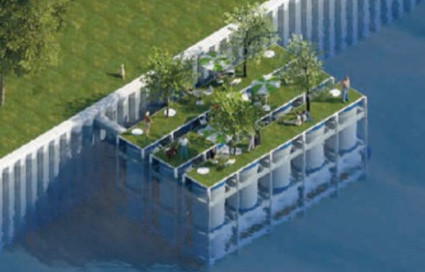 In Berlin, although the Spree is swimmable on the outskirts, the river and its subsidiary streams within the city are periodically contaminated when heavy rainfall overwhelms the municipal sewage system and, in order to protect the streets, the overflow, including raw sewage, is diverted into the Spree. The measures implemented by the city of Berlin to date – underground concrete basins as buffers and an intelligent canal control system – remain insufficient to capture the 3 to 4 million cubic meters of untreated wastewater still discharged into the river each year. LURITEC, a new system of pre-manufactured, modular synthetic glass fibre tubes that replace traditional concrete tanks and are placed in the river instead of underground can make a cost-efficient contribution to closing this gap. Here citizen’s financial participation can lower public costs of the 60 m Euro project while providing a grassroots democratic backbone. A Consumer Stock Ownership Plan (CSOP) allows for low-risk loan financing of a significant share of the project while at the same time requiring only a small financial contribution from the CSOP participants. Combining different revenue sources, the redemption period for repaying the 12.4 million Euro debt is 8.5 years.